It’s not that often when I get to ride an adventure motorcycle. Heck, I don’t even remember when was the last time I hopped onto one. But I do recall that it was a BMW F 850 GS. Unfortunately, I didn’t get to ride it long enough to comment on its capabilities. However, recently, thanks to KTM UAE, I got a chance to ride a KTM 790 Adventure R and man, it was sheer fun!

Just like I have a thing for cafe racers, KTM has a thing for off-road motorcycles. We’ve seen KTM win umpteen championships that revolve around anything but tarmac. You can gauge KTM’s immense expertise in designing and building adventure and off-road motorcycles by the fact that KTM has been winning the Dakar (bike category) for the last 18 consecutive years before Dakar 2020. KTM uses all that knowledge and years of experience to build its road-legal motorcycles and the 790 Adventure R is one of them. Here’s my review of it.

For me, KTM 790 Adventure R isn’t a bike I would buy for its looks. It isn’t the best-looking bike out there and a lot of that has to do with its front end. Yeah, that weird LED headlight is the culprit. Accompanied by LED DRLs, this headlight is purpose-built and its purpose is to lighten up what’s ahead not to pose for a camera. The side profile of the 790 Adventure R is great. The bodywork is minimal yet looks pretty cool on this type of bike. You can also see many parts and components as they are out in the open. For example, the orange frame of the bike is visible. You would also notice how tall the 790 Adventure R is with a ground clearance of 263mm. KTM has provided a bash plate to keep the beautiful and powerful engine protected at all times; more on this later.

Overall, the 790 Adventure R is a rugged-looking motorcycle and that’s exactly how it should be. Powering this beast of a machine is KTM’s new LC8c engine. It’s a 799cc, parallel-twin, liquid-cooled powerplant which pumps out 95hp and 88Nm. It is mated to a 6-speed transmission. Performance-wise, I had no complaints. It provided enough power to do 0-100km/h sprints a breeze and sufficient torque to handle low-rev manoeuvres. Also, the ride-by-wire is the cherry on the top. The fueling and on/off throttle transitions are spot on! I also have to mention the bi-directional quickshifter. It simply does wonders! I got used to it, no, addicted to it instantly.

It was my first time riding a proper adventure bike; ignoring the time I spent with the BMW F 850 GS, and I must say, I’m impressed. The 790 Adventure R is such a fantastic motorcycle that even a beginner like me could ride it confidently without any hesitation.

I liked the riding position of the bike which was super comfortable, both in on- and off-road. I could munch many miles on this thing without stopping. The windshield is a boon during highway rides as it shears away the windblast brilliantly allowing you to continue riding at triple-digit speeds. KTM has also provided various adjustments to tinker the bike as per your requirements and taste. For example, there’s a higher and lower seat option, and six handlebar mount positions.

Since I have been riding motorcycles for as long as I can remember, I was expecting the 790 Adventure R to perform without any hiccups on the tarmac, which it did beautifully. However, I had no idea that it would be such a brilliant and well-behaved motorcycle in off-road conditions! I mean, it gave me such confidence that I took it to the dunes! Can you imagine that? I had no experience of riding in the sand but the 790 Adventure R made everything a walk in the park for me! 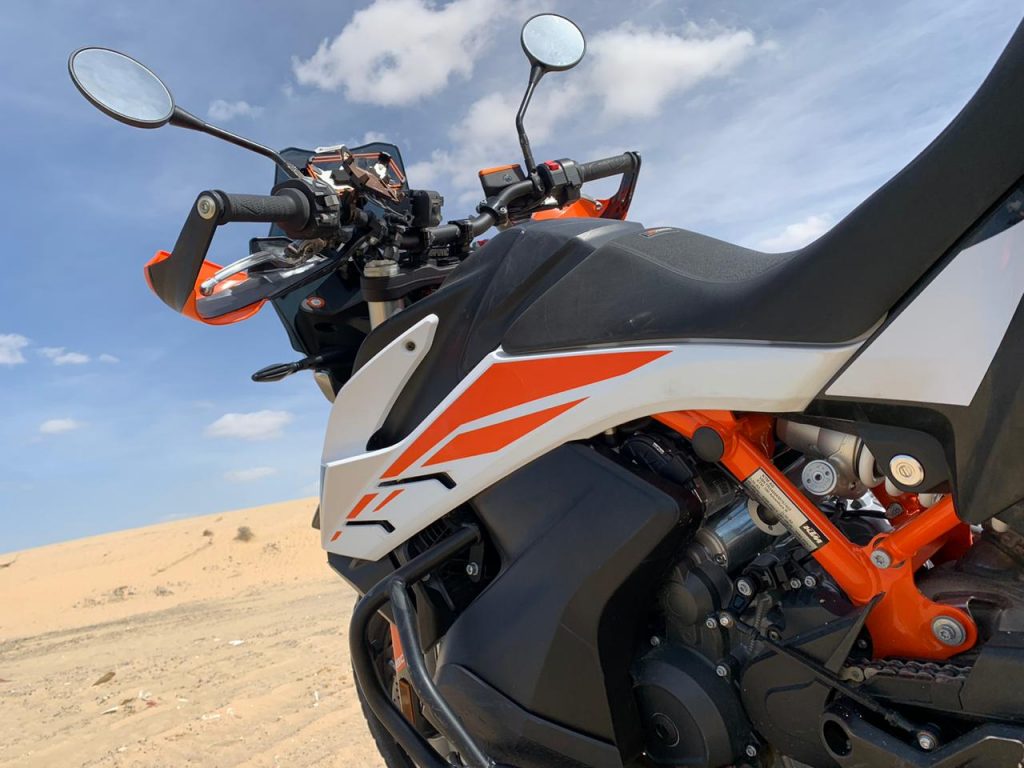 I was astonished how well it performed in the dunes. Its heavy-duty spoked 21-inch front and 18-inch rear wheels with METZELER Karoo 3 tyres are specifically developed for offroad riding performance. Also, thanks to the low-slung fuel tank, the centre of gravity of the bike is closer to the ground improving the bike’s handling in every condition.

The suspension of the 790 Adventure R is very precisely tuned to suit the bike’s character. I found it to be performing flawlessly on all kinds of terrains I tackled. Also, switching between the riding modes actually changes the way the bike responds to your inputs. Using these modes you can alter various settings, like how early or late ABS kicks in or how sensitive the traction control is and whatnot. KTM 790 Adventure is a phenomenal machine. It is powerful, lightweight, and super fun to ride. It can take you to places where you have never been to or never even thought of going to before. It is a perfect tool for long-distance touring. And I have no words to explain about its off-road performance. It should be a perfect motorcycle for a beginner who wants to enter into adventure and off-road motorcycling. Just like me!

Thanks to KTM UAE for lending me this hell of a machine because of which I have now developed a thing for adventure and off-road riding. And I’d go as far as to say that I might even buy a 790 Adventure.