They say looks are subjective, but when you’ve got a magnificent masterpiece like the Forty Eight itself parked right in front of you, there’s no way you can look the other way ignoring it without admiring its ‘Dark Custom’ attitude. It shows off its more low-slung style a lot, it likes to do that. And its overall stance is very intimidating. Harley changed a few elements at the front of the motorcycle like the beefier front forks and a wider tyre. These changes add more muscularity, masculinity and road presence in the Forty-Eight’s appearance. And these changes aren’t just for looks but they play their specific role to make the new Forty-Eight a better bike than its predecessor. Long gone are the days of having normal styled rear view mirrors. They were boring. The new 2017 Harley-Davidson Forty-Eight incorporates handlebar mounted low-slung rear view mirrors. These go hand-in-hand with the low-slug attitude of the motorcycle. They definitely add a point in terms of looks, but how functional are they in real world scenarios, especially for tall riders, is questionable.

The instrument cluster of the new Forty-Eight is nothing exceptional. It is an old school type unit with a big dial that sits above the headlight and shows how fast you’re going. And at the bottom of the dial is a small LCD screen which accommodates all the tell-tale signs. The side profile of the new Forty-Eight is not so much different than the last model but the new ‘peanut’ fuel tank is definitely an eye catcher. It is designed to attach a retro feeling to the bike, which it successfully does. At the same time, it doesn’t look outdated at all. Complementing the glossy fuel tank are the chrome plated exhaust pipes emerging out of the chunky V-twin engine. The first thing for comfort that is necessary for a rider is the saddle. That is the thing that you’re going to plant your butt on. And if that’s not comfortable, then even a marvel like the new Forty-Eight, can’t help you complaining about it. Luckily, the saddle on the new Forty-Eight is quite comfortable. It won’t mind you sitting on it for a few hours and that is what it has been designed for, short rides.

The new 2017 Harley-Davidson Forty-Eight gets new suspension setup. The front forks get a travel of only 91.44mm but are now much beefier than before. The rear suspension is manually adjustable. This means that the new Forty-Eight will take in most of the undulations of the roads that you’d encounter quite well. And to help the suspension setup, the Forty-Eight comes with new wider Michelins which are extremely grippy too. Powering the new 2017 Harley-Davidson Forty-Eight is the iconic 1,200cc V-twin Evolution engine. It produces a healthy 96Nm of torque from as low as 3,500 rpm. This allows you to pull away easily from very low speeds even in higher gears. Also, the use of cast aluminium wheels has allowed Harley-Davidson getting rid of a few extra kilos although it still weighs 252kgs, wet. The new Forty-Eight is a low-slung motorcycle. It has a ground clearance of 110mm. This makes it a good handler. Also, the suspension setup on the motorcycle doesn’t travel much and this allows you to tackle corners and curves with more confidence with decent lean angles.

In terms of straight line stability, the Forty Eight is rock solid. Open up the throttle and it will launch like a bullet. All the ground breaking torque will start working to get you from standstill to three digits speeds in no time. Such a heavy machine capable of doing such speeds needs matching braking performance, and that Harley Davidson has provided by upgrading the braking system – front disc is now bigger at 300mm and availability of optional ABS – is truly a welcome addition. 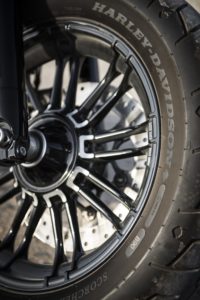 It is a fun bike to ride, both on open highways and twisties, but you can’t crunch many miles in one shot because the fuel tank capacity on this one is a mere 7.9 litres. With that tiny tank and the high capacity of the engine and what speeds the motorcycle is capable of doing, you’d be constantly looking for a fuel tank station after a few rounds of enthusiastic riding.

The new 2017 Harley-Davidson Forty-Eight is definitely a step up from its predecessor. It is so much better than the outgoing model in many ways; better looks, better suspension setup, better brakes, better performance, better handling. It isn’t meant to do long distance touring or to kill the corners on a race track. Harleys aren’t meant for that. It is meant to enjoy a leisurely ride and enjoy short commutes. It is a premium motorcycle and it demands attention. Take her out on weekends for breakfast rides or even use it for commuting to work, the Forty-Eight will not let you down.

Harley has done a fantastic job in making the new 2017 Forty-Eight an old school yet modern motorcycle for its customers. Like I said at the beginning, there are off road motorcycles and adventure tourers, there are sports bikes and there are ATVs, and then in a completely separate world, there is Harley-Davidson.