Vespa Club of Jordan, along with Darwazeh Motors have recently organized a breast cancer awareness ride in Amman, Jordan. The ride was organized to raise awareness about breast cancer and how early detection can help in curing most cases. “Our campaign was under the title of “HOPE” as early detection can give hope” said Issam Husseini, head of the organizing committee. The ride took place on the morning of Friday the 27th of October, and roamed through the streets of Amman, with two pit stops: the first being at Rainbow Street, where participants handed out Vespa designed cards to people to write well wishes and words of encouragement to the breast cancer fighters. More than 50 cards where filled with great words by lots of people, the Vespa club will later create an album including all of the cards, and share the album with The King Hussein Cancer Centre, and then after will be shared with breast cancer fighters at the center. “We hope the encouraging words will uplift their spirit and give them hope to fight even stronger” was the message participants passed through this act. The campaign also raised some donations to the cancer center and will be given along with the cards to the center. The second stop was at the new downtown of Amman; The Abdali Boulevard; where participants in the ride did a symbolic act by releasing more than 100 balloons in the air, as a metaphoric gesture representing “Hope”, the name of the campaign. Balloons spread the voices of hope wherever they travelled and landed. 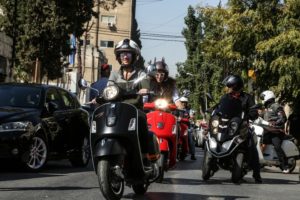 The ride concluded in Abdoun neighborhood. The route was carefully designed to attract the attention of maximum number of people; and that definitely paid off; as many people engaged with the riders and had good chats about the cause of the ride. The initiative was great, and we are looking forward to seeing more of these activities throughout the Middle East.